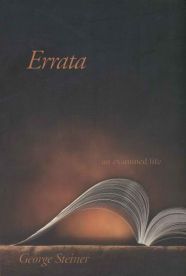 Quietly enter George Steiner and his Errata. “Errata” is the plural of erratum, which most commonly signifies an error in a manuscript. This title he chose for an autobiographical work of 171 small pages, and it bears not only the famous self-deprecating humor of the Jewish-American immigrant, but also the untouchable canniness. Furthermore, this book is a prime example of economy; Steiner is neither verbose nor laconic, and like a poet he squeezes the pulp from every word. For those not interested in the craft of writing, what’s actually being written about will cover the price tag regardless—and if you have any feeling for preservation, you’ll save the Renaissance man, so soon extinct.

Francis George Steiner was born in Paris in 1929. He now lives in Cambridge, England where he is Extraordinary Fellow at Churchill College at the University of Cambridge.

Let’s start with some intimidation: studying math, physics and literature, George Steiner received his BA from the University of Chicago with all nineteen of his years weighing heavily upon him. That was in 1948 and not exactly a nadir for U-Chicago. He then matriculated at a couple small universities: one in Cambridge, MA, and another in the county of Oxfordshire, England. Since then he’s been a writer (a common synonym for “professor” but with a slightly different etymology), working both creatively and critically.

The synthesis of the creative and critical is the implicit definition of the classic—criticism being not any puerile act of vandalism, but rather one of Socratic discourse or, if necessary, quick annexation (that idyll country of the canon). Steiner’s knowledge of the classics is intimate. He speaks Spanish, French, German, English, Yiddish, Italian, Latin and Greek. He does not, he laments, speak Russian or Hebrew. Beyond this manifest polyglottony, his scholarship defies summation, and at this point I must make an inevitable digression, another query:

For what purpose do we read criticism, or even the autobiography of a critic? It’s a bit like bloodletting, and all very violent. The first book of criticism, chosen at an appropriate level, merely cuts the sense of literacy. By the third it is well-lacerated, yet one cannot but continue. To begin to read again, we must first drip dry. Critics are our morbid surgeons, wielding ambidextrously knife and IV. Our illiterate blood drains out as it’s replaced by a chilled transfusion. Sanguine, we return to the page. If we survived.

Literacy according to George Steiner may not be paramount with you. The road is long and populated with the dead. No matter; Steiner will accommodate. Pedagogical technique is one theme throughout the book, which is itself educational. First his father deftly drew young Steiner’s eyes to Homer—the anecdote is moving and enviable (how many of our dads taught us ancient Greek?). Steiner’s life as a student was in unimaginable proximity to brilliance, but before discussing that, he tells us about the quick growing-up he got from his G.I. roommate, a paratrooper named Alfie, and about his first time—yes, what it sounds like—in Cicero, Illinois. We learn of his bewilderment at another other first time: reading the work of Martin Heidegger. Then come the local luminaries, like Walter Benjamin, R.P. Blackmuir, Allen Tate…and the last’s aborted engagement in a duel with Karl Shapiro. (Steiner’s war council was required. Tate summoned him at an ungodly hour to ask if he was Jewish and, that being so, did he know whether a Jewish man could accept a challenge to duel?)

Allen Tate (1899-1979) was an American poet, critic, and amateur duelist from Kentucky.

The droll mixes as it must with the austere. Steiner’s career as both a professor and a writer seem to carry a Mosaic sadness. His four brightest pupils turn against him or fall short of their potentials—the tablets turn from stone to paper in his arms. His greatest claim is, he realizes, that he is a polymath, a jack-of-all-erudition, in an era of specialists. He sees his works of tremendous insight pilfered shamelessly and without acknowledgment, for one assumes that it is easiest to steal, even intellectually, from the man who has the most. Yet, admirably, he persists.

And for that we should all be thankful. He persists through disappointment, plagiarism, and marginalization in the face of a constituency—us, reader—increasingly inane and a world, as is so evident to his beleaguered people, inexcusably brutal. His fellow critic Theodor Adorno asked: can poetry be written after the Holocaust? Adorno said no. Steiner thinks yes, but it is not for him to write it. Having trudged to the summit, he directs us all to those pastures he knows he will not himself reach.

Besides comparative literature: history, linguistics, musicology, philosophy, government and impeccably measured social criticism—nothing escapes George Steiner’s pen. Of special relevance is the nigh-palpable joy he takes in learning, teaching, and being taught. Luckily for us, a good number of his teachers wrote books now readily available, so they can continue their noble work post mortem. Our little state school is fortunate to have some great professors of its own, and one need not search long to find them. However, one must be swift: they are but mortals, liable to retire or even to be refused tenure.

Again, how might the work of a critic, an impotent lover, rest on our nightstands? Such books are fairy things; finishing it, you wake up to see three new books in its place. The task of any scholar is that of Sisyphus, and George Steiner has pushed the boulder for some time. Nonetheless, his style is even, unflinching. Where most behemoths of learning would be heavy-handed, he is light, humorous, and infinitely insightful. My solitary critique is that a pet word of his, acerbic, essentially means “acidic-ic.” But a counterpoint: I don’t know eight languages, nor do I have a degree, nor have I published books. Of course, any such pains might be assuaged with the guidance of Steiner and writers like him. An ever-expanding bookshelf can go, as it were, a long way.

Oh, and the secret to being interesting: reading, obviously. Otherwise you’ll have a terrible autobiography and no one will recommend it in any newsletter ever.